Previous Next
A Season of Epiphany 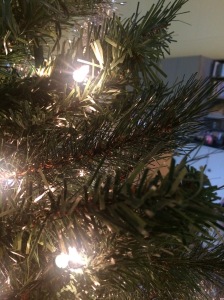 Somewhere in my online reading of late, the phrase “season of epiphany” sparked my curiosity. A little searching uncovered that some Protestant churches observe the weeks starting with the feast of Epiphany on January 6 until Presentation/Candlemas on February 2 or until the start of Lent as the season of epiphany. I find myself very drawn to this concept and have in fact been observing it already in a symbolic way, by leaving up select decorations from the Christmas season. Just like Easter has a season, this practice gives more presence to Christmas, more gravitas beyond the secular celebration, and it serves as a kind of bookend to Advent.

At our house the strands of white lights on the deck remain lit for weeks (sometimes months, on automatic switch) but the colored lights of the Christmas tree are put away after January 6. By then the twinkling red, green, blue and orange bulbs along with shiny tinsel and ornaments seem garish, and I’m very ready to return them to storage downstairs. Actually this year the tree had white lights and we took off just the ornaments and this plainer tree is lit right now to my left. Very cheery in the dark mornings. The nativity scene is left up but the colorful add-ons like decorative trees are no longer present. Our daughter’s collection of painted wood nutcrackers is put away, as are the St. Nicholas and Santa figures and the red candles, and the jingling bell and red bow on the front door knob.

I haven’t thought much before about why we do these things. Upon reflection, I see that it has to do with connecting to the natural season. At some point I realized the Christmas centerpiece needed at least four candles. The feast of light in the darkness could not have fewer illuminations than the preparatory season after all. Then it seemed quite normal to extend it beyond even the 12 days of Christmas. Again, January is dark. I’ve experimented for several years now to find a candle arrangement that suits for this time of year. I’ve tried re-purposing the Advent wreath with different candles but somehow that hasn’t felt right. In a less is more scenario, this year I just used a random assortment of pillars and tapers that I had in the cupboard and the varied heights and sizes somehow work perfectly. 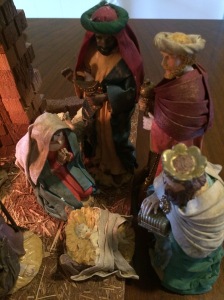 Epiphany means to show or make known. What is being revealed to me this season? A lot actually, as I contemplate. I’m seeing all the more clearly that the truest knowledge comes from within. This new year I joined a guided online writing group that kicked off with identifying my key values. “Trust” topped my list and has become itself the source of epiphany in this season. Trust what’s percolating from within to guide the writing, the decisions about my mother’s health care, the planning of next steps on projects I’ve undertaken. Take in what others are saying, notice what’s going on, but let those outer inputs meld with intuition, then act from the clarity that results.

Not surprisingly the Gospel readings for this season of Sundays offer up vibrant examples of intuitive faith. The magi surely acted on a gut feeling when they set out to find the newborn king by following his star at its rising. And in subsequent weeks the stories of Jesus suggest that he was listening to a still, small voice – going to the Jordan to be baptized by John, changing water to wine at the wedding in Cana, proclaiming the Torah and announcing his own calling as God’s anointed (nearly being stoned afterward).

Yesterday I walked our dog at nearly 6:00 pm and it was still dusk, not yet full dark. The days are lengthening. Soon we will close out the season of epiphany, storing away the winter feasts’ final remnants as the wheel of the year gradually turns toward spring.

Read more about the various observances for February 1 and 2.

A Patron Saint for Autism

A Patron Saint for Autism