Previous Next
Art of Surprise

Before this weekend, all I knew about the artist Elizabeth Nourse is that she was from Cincinnati and she painted mothers and babies. Both statements are true, but there’s so much more to appreciate about her!  I’m very glad to have happened into an exhibit of her work at the Cincinnati Art Museum on Saturday.

At the entry, Nourse’s 1892 self-portrait greets visitors and immediately establishes that she took herself and her art seriously.  She appears hard at work, hair slightly askew.  Her determined gaze looks out, seeming ready for any challenge.  Born in 1859, she and her twin sister were the youngest of ten children, and they grew up in Mt. Healthy, a community northwest of downtown which was a center for abolitionists and perhaps influenced her painting.

An early work called “Head of a Girl” appears early in the exhibit near Nourse’s self-portrait and warmly portrays a young African-American girl at a time when such a dignified treatment was rare.

Beginning at age 15, Nourse studied for seven years at the McMicken School of Design, then for a few years in New York and Tennessee before moving to France with her older sister in 1887.  With Paris as her home base, she traveled and painted in Europe, Russia, and North Africa for the rest of her life.

In fact, this artist who painted women and children with such realism and sensitivity never married or had a child of her own.  She supported herself and her sister through her art, and her appreciation for diverse people continued to be reflected in her work. Nourse was the first American woman to be voted into the Société Nationale des Beaux-Arts.  She also had the honor of having one of her paintings purchased by the French government and adopted into the Luxembourg Museum’s permanent collection.

Her family struggled financially when Nourse was growing up, and besides her successful artistic career, Elizabeth consistently reached out to others throughout her life.  She loved to sew, and the exhibit states that as an adult she sewed and altered clothing for those in need, remembering her own childhood.  She also made cloth dolls, two of which are displayed in the exhibit. During World War I,  she remained in Paris assisting war refugees and solicited funds from friends in the United States and Canada to provide aid. She received the Laetare Medal from the University of Notre Dame in 1921 for “distinguished service to humanity.” She died at age 78 in 1938.

I still gravitate to Nourse’s images of motherhood, because they portray the fullness of the experience with such power.  They are sweetly beautiful without being sentimental or cliche.  The maternal images are even more meaningful when seen in the larger context of all her subject matter.  In my writing about spirituality and childbirth, my fervent desire has been to articulate the significance of birth in a woman’s life in a way that does not limit our purpose to the biological capacity to bear children.  Elizabeth Nourse feels like a kindred spirit for this endeavor. 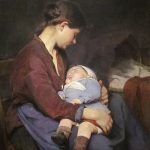 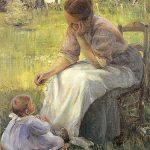 On the left is an 1888 painting called “The Mother” which is in the exhibit and owned by the Cincinnati Art Museum.  Just looking at it suggests the weight of holding a sleeping child, that willingness to remain still no matter how tired your arm or shoulder or lower back gets just so they’ll rest.  And the title, “A Mother,” underscores this impression.

On the right, “Meditation” (1902) viscerally evokes the reality of endless days tending a baby — delight in their presence, constant fatigue, and the inability to get things done.

For my Cincinnati readers, the Nourse exhibit will be on display in the Cincinnati Wing through March 2.  The Museum’s acquisition of her large painting “The First Communion,” considered a masterpiece, occasioned this special showing of her work.