Previous Next
Connect the Maternal Line on Motherless Mother’s Day

I wrote this post on what would have been my mom’s 80th birthday in 2013. She had died in 1970 at age 37, more than half of an 80-year life span earlier. As the date approached, I found myself wanting to mark it somehow but lacking any specific ideas.  Finally, I realized that my desire was to claim her and give her back her place in the chain; she had been erased and needed to be put back.  I updated it in 2020 to consciously mark motherless mother’s day for myself.

My mother’s life was far too short but her presence continues, as does the chain of life. For Motherless Mother’s Day 2020, I updated the Chain to include our newly born first grandchild.

The title and format of the poem below comes from a reflection by the same name in Tikva Frymer-Kensky’s collection Motherprayer, in which she suggests creating “a genealogical chain celebrating the handing over of motherhood from generation to generation.”

I am Peg,
writer, healer, wife of Joe
mother of Michael, mother in law of Kathryn
grandmother of Eliza Christine
mother of Kieran
mother of Christian

granddaughter of Julia, who is
wife of Lee
mother of  Mary Lee, mother in law of Al

granddaughter of Alice, who is
wife of Al
mother of Al, mother in law of Mary Lee

(Click on the photos to enlarge and view captions.) 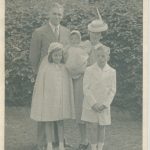 First communion for twins Mary and Bill, 1941. Her Catholic faith was important to my mother all her life. I remember her going to daily mass and praying the rosary. 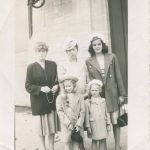 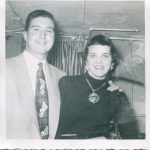 A very young photo of my parents, 1951, several years before they were married. 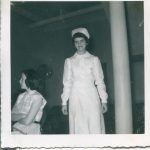 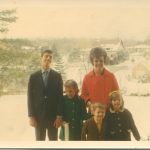 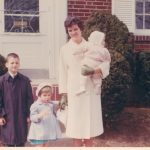 1964, looks like Easter. My mother’s journey included parenting a special needs child, my sister who is blind. Embracing this role, my mother learned Braille and devoted much energy to my sister’s flourishing. 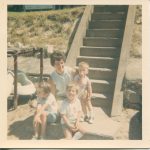