Previous Next
Grappling with Body Image

Recently I spent 10 wonderful days in Rwanda with my 22-year-old daughter. She studied there for a semester during college, and this trip was a chance to re-trace her steps and introduce me to the people and places she fell in love with two years ago. Likewise, it quickly became obvious that her host parents Hortense and Athanase along with their network of friends and family had fully embraced Kieran in return.

The first morning after our arrival, Hortense’s sister Immaculate stopped by and her words of greeting to Kieran completely startled me. “Wow, you’re big!” She spoke in a marveling tone, stepping back and looking carefully, assessing. What!? Kieran is not fat! We would never say that here, even if we thought it, though Immaculate’s tone mirrored the way I might exclaim to a friend, “Wow, you’ve lost weight! You look great.” Later when we were alone I interrogated Kieran, “What was that? Why did she say ‘you’re big’!?” “It doesn’t mean the same thing here, Mom. She was telling me I look good.” Sure enough, it happened two more times in the ensuing week, with a friend of Hortense’s who we ran into at the grocery store, and then during a visit with the director of Kieran’s prior study program.

Kieran with Celine, her study program director, and Hortense, and Celine’s new baby.

A little research turned up that plump, buxom, rounded women have traditionally been seen as desirable in many African cultures, to the extent that young girls were sent to “fat farms” before marriage, to gain weight. They sat around, no activity, and were fed (force fed in some descriptions) high calorie foods like dates, couscous, etc. This practice apparently continues to some extent in the present. From a patriarchal perspective, large bodied women signify the wealth of her family and her fitness for childbearing.

Witnessing my daughter’s encounters with three African women of today, all in their 30s, I heard pride and celebration in their voices. Near the end of the trip, still shaking my head a little in disbelief, trying to imagine telling someone at home, “You’re big!” and having them feel pleased about it, I brought it up with Hortense. She hardly even understood the question, as though why would I wonder about something so ordinary. “They were saying that she looks good, that she’s grown up. When you studied here two years ago, you were still a girl.”

How about that? Acknowledging the natural process with pleasure. I am practically overcome by the chasm between “You’re big!” and the American cultural icon of beauty as skinny and emaciated, straight lines rather than curves. All I can say is “What if?” What if all women adopted this attitude? What if all cultures believed it and actually lived it? Real health consequences are at stake. In the US, the incidence of eating disorders rises each decade across all ethnic groups, with serious health effects ranging from blood pressure changes and tooth decay to loss of bone density, kidney failure and gastric rupture. While there is no single cause of body dissatisfaction and disordered eating, research clearly links media exposure to the thin ideal with the development of these conditions. The effects seem to be stronger on young adults than children or adolescents both female and male. Interestingly, in an exception that supports the rule, Hispanic and Black girls and women who watch more Black-oriented television have higher body satisfaction. In addition, with increasing globalization studies indicate that as countries become more Westernized – with more mass media exposure – eating disorders increase.

I listen to the women complimenting my daughter during our stay in Rwanda and hear an invitation to embrace my body as it is, which includes caring for it as best as I can, lovingly, gently, without criticism or disdain for its expanding girth. What would it take to celebrate roundness? How could this change be brought about? I think we’d need new images, new icons of beauty. I’ve just read several articles and watched part of a video about ideals of beauty through different historical periods. Ancient Egypt revered thinness while the Italian Renaissance had high regard for full hips and breasts and rounded stomachs. But these just reinforce that an externally defined ideal is precisely the problem. Thin women during the Renaissance would have the same problem of dissatisfaction that I do now. The key is to revere what you have.

So, roundness is what I’ve got. What would it take to celebrate it? One autumn day a few years ago when I was doing work hours at the local farm where we were CSA members, I received a clue. It was a misty, chilly October morning, invigorating and peaceful both. As we returned to the shed dust-covered after pulling turnips from the ground, a seasonal display to the left of the door suddenly caught my peripheral vision. I almost gasped aloud at the voluptuous orange pumpkin juxtaposed with other gourds in deep green, clean white and even a rich purple. In a flash of intuitive clarity, I understood middle age as the autumn season of life, how this stage could be vivid and beautiful in its own way. Jewel toned against a softer light rather than the intense colors of summer’s fiery height.

Just this past weekend I was in Washington DC with Kieran as she departed to a year-long volunteer commitment here in the states and twice “roundness” caught my eye in the Hirschorn Museum sculpture garden on the National Mall. The image on the left is called Seated Yucatan Woman by Francisco Zuniga and on the right is Evocation of a Form: Human, Lunar, Spectral by Jean Arp. 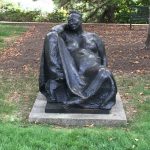 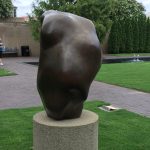 Author Alice Walker is credited with coining the term “womanist” to denote African American women’s experience and reflection as distinct from feminism dominated by white women’s stories and concerns. Her 1983 book In Search of Our Mother’s Gardens includes an expansive definition of Womanist that in its third definition speaks poetically to the matter of body image: Loves music. Loves dance. Loves the moon. Loves the Spirit. Loves love and food and roundness. Loves struggle. Loves the Folk. Loves herself. Regardless.