On a recent weekend away with several high school friends, around the outdoor fire pit one night somehow we began sharing stories of our early experiences with libraries. I thought I was just weird in my heartfelt devotion to these sacred spaces, but it turned out each of us holds treasured stories of interacting with librarians, loving books and feeling attached to a particular branch.

I vividly recall applying for my first library card when I was about six years old. My mom had been working with me for weeks to teach me how to sign my name, the major prerequisite of the application process. She and I sat together at the kitchen table as my chubby fingers clenched the pen and laboriously imitated the letters she had demonstrated. At times I cried when I couldn’t shape them to my satisfaction, but I kept at it. My mom was mostly patient and encouraging, though she occasionally sighed at my outbursts of frustration. Finally I achieved success, and one evening after dinner we went to the Northern Hills branch, where I proudly reached up to the desk to hand over the green cardstock form. The librarian smiled and told me I could take out two books that night on a temporary card until my actual one was sent in the mail.

I don’t know if I asked for the library card, sparking the signature lessons, or if my mom initiated the idea. Either way, I love this memory. It is one of only a few specific recollections that I have of the two of us, because she died of breast cancer when I was seven. A year and a half ago I began working on a memoir about grieving mother loss, which for me didn’t really begin until young adulthood. As part of the writing process I felt drawn to re-visit this memory in greater detail, so I took a field trip. Now called just the College Hill branch library, it’s 15-20 minutes from my home, so one morning last January I set off to visit. I hadn’t been inside since childhood and only drive past it occasionally.

It’s a low rectangular structure made of light brown bricks in varied shades with a covered entry supported by distinctive pillars made of cement with decorative stones in shades of brown and gray. The pillars create curved arches inside the building and outside under the overhang. On the day of my visit, the library was bustling with people working at the computers, getting assistance with their searches and how to print a document. There were people checking out books, reading materials at the tables, and several filling out forms. One may have been a job application; forms for various assistance programs were available and tax forms too. A friendly, busy energy permeated the place. I felt welcome but not particularly noticed, which was perfect.

On the way in, a historical marker by the side of the parking lot explained that the land occupied by this branch of the library, the public elementary school next door and the “commons”/park behind the parking lot were originally part of the Crawford Farm. John Crawford, who fought for the Union, donated the land for a rest home for black soldiers of the Civil War, which later merged with a facility for African American women. The library was built on the site in 1966, making it only a few years old when I applied for my first library card there. African American history awareness continued inside the building with a poster on the right wall over the copy machine describing a slave escape of the Underground Railroad that occurred in the area, the largest one, 28 escaped slaves transported by posing as a funeral procession.

Following my brief tour, naturally I browsed the shelves and left with several mysteries, savoring the familiar richness at having a stack of new books to dive into. After my mom died, our neighbor up the street who drove us home from school each day would take us along with her two daughters to the library every few weeks. I spent a lot of time with this family on many outings and visits, but even then these regular library trips meant the most. Books were a refuge for me. Mysteries like Nancy Drew and Cherry Ames. 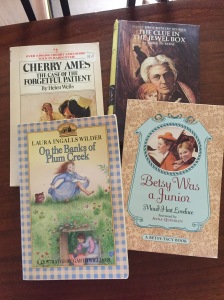 Historical fiction like the Little House books, the Betsy-Tacy series, and Little Women. I also read a lot of biographies of men and women, especially presidents and their wives such as Lincoln, Washington and Kennedy, as well as other historical figures like Elizabeth Blackwell and Helen Keller. Often after school I curled up in the corner of our family room couch with an apple and read until dinner. When I became a mom myself, taking my children to the library and eventually applying for their own library cards brought special satisfaction. My love of libraries continues to this day, and it’s a real joy to trace this lineage all the way back to my mom.

Libraries need our love! For the first time, National Library Week includes an advocacy component in the form of Take Action for Libraries Day on Thursday, April 13. All are urged to speak up against cuts in federal funding to the Institute for Museum and Library Services.  Learn what you can do.