Previous Next
Telling Your Grief Story: A Playful Approach 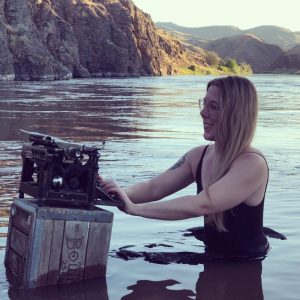 Digital bread crumbs occasionally do lay a rewarding path, and I’m delighted to share such good fortune with you here. Clicking links recently from an article on Grief Diaries led me into the grief story of writer, artist and teacher Ann Petroliunas, a Chicago native now residing in Portland OR.  Her mom died of breast cancer 20 years ago when Ann was 17. Among other projects, Ann has created a chap book called Post Mother America, a compact collection that tells her grief story, the spiraling mix of confusion, sorrow, anger and love that reverberate from early loss. We had a great conversation about how writing and other arts help with telling our grief story, no matter how long it’s been since the death.

Were you always artistically inclined? To what extent was the creative impulse fed by grieving early loss?
I think I’ve always had creative outlets. My mom signed us up for ballet when we were little, and I danced until I was out of college. As an adult, I’ve tried out photography, pottery, acrylic painting. I can’t sing or draw. I’ve dabbled in lots of things and enjoyed some success and satisfaction but never felt as fulfilled creatively as I do now that I found writing.

Was there something specific that launched you into writing about your mom’s death, or did it occur more gradually? Tell me about how Post Mother America came about.
My dad’s family is from Lithuania. I spent three summers in Lithuania, when I was 26, 27, 28, part of a volunteer program of American teachers. I became interested in how the stories I learned there differed from the story I’d heard of my grandparents and what I’d learned in history classes, and I wanted to write about being Lithuanian-American. After the second trip, I signed up for a personal essay class at the Story Studio in Chicago. It was awful, lots of criticism, but something stuck with me. Then I registered with a different teacher, and it was like night and day different. I found a supportive community. It was also a personal essay class, but it was more fun. The teacher took a more playful approach. 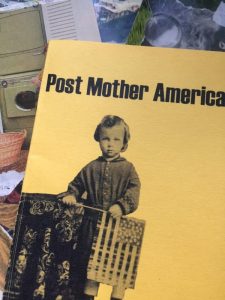 I still remember the prompt that shifted my direction: “Write about the first time that . . . “  I began to write about funerals. It was all very linear, just writing what happened. I kept going back to it, kept working on it, and later it became the prose poem [in Post Mother America]. Then all of a sudden I was writing, writing, writing about Mom. I couldn’t get away from it, for about 10 years on and off.

After I moved to Oregon, I found great programs in Community Education at Portland Community College, as a kind of replacement for the Story Studio. I took a course called “Experiments in Poetry,” because I was tired of thinking about telling the whole story. This was more playful and it helped free up some creative blocks.  I found new ways to express myself without feeling like everything had to be serious and focused or that every time I say down to write I had to accomplish some word count goal.

Every week we learned a new short form – haiki, erasure (where you black out certain words), cut outs (arrange words cut from magazines), and collage. I found collage to be useful as a writing warmup and also as an alternate way to process. The words in collage came first for me. I found it a fun way to make something with a few words and a few pictures.

Later I was encouraged to apply to the certificate program at the Independent Publishing Resource Center here in Portland, which is a year-long certification program with a semester of writing classes and a semester of production classes, like design, illustration, book binding. I didn’t consider myself a writer when I applied, but I did appreciate how helpful it was for processing things. Post Mother America came out of that, as my final project incorporating the writing and the production of the book. I completed the certificate in May 2017.

How did you get the idea for the “griefing” cards? (Available at annpetroliunas.com)
I got the idea for a collage series about grief and applied for an artist residency at Sou’wester Lodge, a vintage travel trailer resort/art space about two hours away 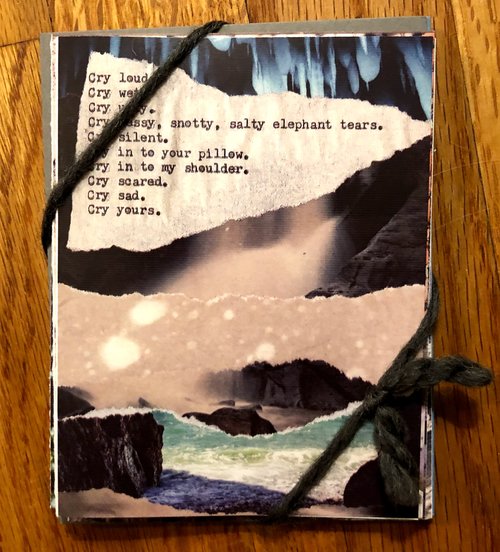 from Portland. During the week I spent in a vintage trailer on the coast, I began to think about how to spread this to people not so much as a business, but as a way to share the sentiment that grief hurts and that’s ok and the words of consolation that are helpful to one person are not the same for everyone, and I landed on cards as a way to share my art around that. It’s such a struggle to know what to say.

People said things to me after my mom died, like “She’s in a better place,” and I thought, “I don’t want to hear that!” I thought it would be fun to make a series of cards that could say “grief feels awful,” and be a little more honest, sharing what I’ve come to terms with.

What has “telling your story” done for you?  How has your telling of it evolved over the years since your mom’s death?
It helped me appreciate that it wasn’t just about me. I could be funny and relatable, and other people without the same experience could still connect. Ultimately what it did, is help me realize that it’s not my problem that grief is still with me. It’s our culture’s problem that we put limits on the timeline of going through it. Writing about it has made it ok to be still going through it 20 years later.

I’ve had other losses since my mom, a friend not too long after, then in adulthood a student I was very close to, and most recently one of my best friends, also to breast cancer. The creative process has helped me to almost celebrate my feelings rather than beat myself up in the feelings I’m still having.

Are there particular techniques you use to access memories?
My mom was super organized, and my dad still lives in the house where we grew up.  The photo albums are in chronological order on the shelf in the guest room. I’ll dig through them when I’m home, and they trigger some memories. I might snap pictures of certain photos with my phone; then back in OR, if I need inspiration, I’ll flip through them, as a prompt for myself. I might start just by describing everything in the photo. My sense of smell is tied in to mom memories, like salty air or birthday treats. Looking at photographs can trigger smell memories, or out of the blue, a smell will hit me at all sorts of times, like lilacs, a new tube of certain brands of lipstick, women’s restrooms.

How has telling  your grief story impacted your family relationships?
I think it’s actually brought us closer together. My sister is three years younger, and we had a lot to work through. After the death, I took on a mom role, which she resented. She kept herself busy the rest of high school, often out of the house, and then went to New York for college. In our mid-20s we reconnected. My writing has helped us talk. Also, I never claim that mine is the only version of the narrative.

With the book, I was concerned about my dad, because I tell about smoking, drinking and cursing! I think it made him sad, but he’s proud of me. Now he’s talked to me more about Mom than he has in years and years. It feels like it was an invitation. It was never taboo to talk about her, but it feels freer now.

If you were speaking to a teenager who just lost her mother, what wisdom would you offer to help them tell their grief story, especially if there is ‘unfinished business’?
Grief looks different for everybody. There’s no timeline. The timeline is yours. I remember asking a therapist about ten years after my mom died, “Why am I still grieving?” I received a wise answer: “You don’t get over grief. You move through it.” So now I’d say, there’s no right way. Talk or don’t talk. Cry, yell, beat your pillow. Find your outlet (though I think journaling is good for everyone) – sing, write, make music, run, play basketball. Do something that’s you, which allows you to release into the process.