To Leave the Outgrown Shell

Previous Next
To Leave the Outgrown Shell

Last week we laid to rest my husband’s maternal aunt, his mother’s only sibling, Mary Lois Jung. She was a most wonderful and unusual individual who meant a great deal to me. In his remarks at the funeral, Joe observed that because she spent 30+ years in places like Pakistan and Papua New Guinea as a surgeon in the Medical Mission Sisters, he really didn’t know her until young adulthood. Mary Lois was a figure of some mystery, admired at a distance, until she left the order and settled on the Jersey shore in the late 1980s.

Coincidentally my relationship with her dates to this same time because of my longtime friendship with Joe’s sister. We were roommates after college, and I enjoyed several beach trips to Avalon NJ in groups of young adults. From the first I loved listening to Aunt Mary Lois’ stories of her travels and appreciated her quietly generous hospitality. Deeply spiritual and intuitive, she was also a lot of fun. When Mary Lois later built a new home to
accommodate family groups, Joe and I began a beach tradition with our kids. The needs of young children meant these trips were considerably less carefree for us than in our 20s, but Mary Lois embraced the new stage unreservedly. Having missed her nieces’ and nephews’ growing up years, she was fascinated with the next generation and took personal interest in each child. 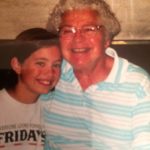 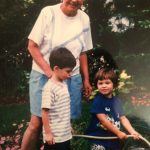 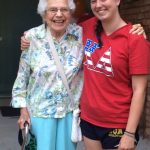 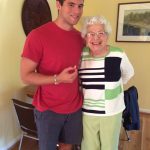 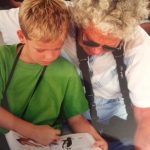 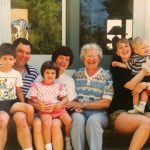 I keep seeing Mary Lois in the typical goodbye scenes at the end of our Avalon vacations. The luggage carrier is packed and closed, and we’re standing by the minivan in front of the house on 58th Street, exchanging final hugs under the bright morning sun. Once the kids are buckled in their car seats and we’re pulling away from the curb, she stands there waving with both hands high over head, smiling broadly, her round face beaming. We all wave back and Joe toots the horn. She stays there waving and smiling until after we turn the corner onto Dune Drive. This image keeps coming to me so crystal clear, as though I’m right there, and the outpouring of love it conveys makes me cry. Back then I felt a little sorry to leave her alone but now I fully grasp her contentment, having thoroughly enjoyed our time together but equally glad for solitude. I imagine her grabbing her visor for a walk on the beach or puttering in her garden.

Though she died at age 88 and had been declining for months due to a heart valve condition, still it seemed sudden. If only a proper goodbye could be planned ahead of time. We had been hosting Wednesday dinner with the “elders” for years, and in the warm months Mary Lois particularly loved to sit on our back deck in the company of the expansive elm, the oaks, bald cypress and gingko. On what turned out to be the final Wednesday, we hosted dinner at my sister in law’s nearby because we’d just begun a kitchen renovation. Mary Lois felt well enough that day to attend and too late, I realized it was a perfect deck evening. Immediately I regretted not motivating to arrange a takeout dinner at our house despite the remodeling underway, sensing that any Wednesday could well be the last.  But we opened the windows to the light breeze and September sun, and Mary Lois clearly enjoyed the gathering as it was, without regret or worry about the deck. Still, my unfinished feelings lingered when she was unable to come the following week and then died two days later.

The joyful Avalon farewell comes to me now as an actual goodbye, evoking tears of both gratitude and grief. Even more profoundly, in the vivid scene that keeps playing in my mind’s eye I also sense her delight at being wherever she is now, and it’s a timely invitation to emulate her grace with goodbyes. The very afternoon and evening of her funeral, I sent off each child in turn, coming and going in the space of 24 hours, with greater freedom and joy, both for their presence here that day and their flourishing in the wider world. The last goodbye of the day was at the airport. Walking back to the car, Joe and I turned to one another and chatted about how to spend the remainder of our evening, content to be a twosome as we savored the pleasure of the kids’ brief visit.

The image of a nautilus shell was chosen for the funeral program, because of Mary Lois’ deep love of the ocean, first nurtured through childhood vacations at the Jersey shore and then furthered when she learned to scuba dive in the Pacific as a Medical Mission Sister. In Avalon, greeting the ocean was a common way to begin our visits and a regular feature of Mary Lois’ routine. When she moved back to Ohio in her later years for health reasons, a beautiful spiraled nautilus shell on display at the entrance to her apartment symbolized her abiding connection to the sea. Turns out the nautilus is the perfect metaphor for Mary Lois’ approach to life. The shell consists of spiraling ever-larger chambers. The nautilus lives in each one for a season until it outgrows that particular space. It then enlarges its shell by the addition of a new chamber suitable for the next stage of its life. As the animal grows, a wall called a septum is produced that seals off the older chambers. There’s no going back, only forward. In maturity, there may be 38 or more chambers. Like the nautilus, Mary Lois kept growing and moving to new chambers “until at length she was free, leaving that outgrown shell by life’s unresting sea.”*